Back online after SIX MONTHS!

Not one blog update since 26th December 2009 – that’s almost six months!!
What’s the reason? Probably because I was totally exhausted from all the work of getting Silly Old Buggers into the Comedy Festival, then into Chapel Off Chapel followed by striving to get it picked up by production companies. We had a recording session as well in December which also took a bit of organising and then it all had to be edited which went into the start of 2010. So, after all that, I was pretty well sick to death of Silly Old Buggers! I’m currently ‘in discussions’ with two production companies and two agents about the future of the show but am not holding my breath for any quick developments.

As I’m a very keen gardener and the weather turned on the best summer and autumn we’ve had for years, I’ve turned my back on my office and computer and been happily enjoying the outdoors. So much so that I have been making a photo record of my Australian garden so that I can check back on what was flowering and when. I’ve put the last couple of months of these records up on Picasa so some of my keen gardening friends – and any other garden nuts who are interested – can share it with me.
http://picasaweb.google.com/118417605757520707585# 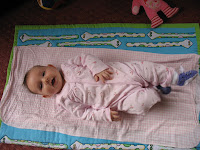 On the family front there’s been a VERY happy event – a new granddaughter, born 17th February; 2010. Her name is Harper Lee Grace Simmons and she and proud Mum, Monique, spent 4 days at Camperdown with her very proud grandparents, where we all had a lovely time getting to know each other.


As for writing? Well, there’s been a small amount of poetry (not for sharing!) and very little else. Now that the winter is upon us I’ve been enjoying catching up with some reading and relaxing. In the back of my mind are a couple of ideas which might get me started on a novel soon. We’ll see.

In the meantime, any further news updates of Silly Old Buggers will be on the SOBs Blog attached to http://www.sillyoldbuggers.com.au/