The Silly Old Buggers are rockin'!!!

Since opening on 14th April - with the first two performances as 'previews' - our show has gone from strength to strength.
Audiences are loving it, ticket sales are increasing daily, and some Very Important People are coming to see us and making very encouraging noises.
I've just put the Age review up on the Comedy Festival website for all the world to see and I'll add the link here: http://www.theage.com.au/news/entertainment/arts/arts-reviews/absolutely-silly-old-buggers-a-musical-celebration/2009/04/20/1240079576255.html
I have very little time to spend blogging so will simply link to my Absolutely Silly Old Buggers blog. Here's the link: http://asob-latestnews.blogspot.com
Performance photos are being shot tonight and I will get them up on the web ASAP.
I have taken videos of a couple of performances for archive purposes and was going to put an excerpt onto the websites but really, with the available lighting and the distance from the stage, they're just not good enough for that. We'll have to make do with stills.

Back to: www.gillianmwadds.com.au
or www.sillyoldbuggers.com.au
Posted by Gillian at 5:01 PM No comments: 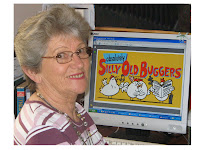 I've hardly had time to think logically for the past month or so because I've been very busy trying to get bums on seats - through publicity, direct marketing, emailing, event on Facebook, you name it....
Here's where we're at right now:
The Melbourne Weekly Magazine’s coverage wasn’t quite as exciting as I’d been led to believe by the journalist. She said, ‘You’ll be on the front page on Monday, 30th' which to me sounded pretty damned exciting. However, it turned out that we were part of the "older audience" target of a number of shows but at least we got quite good coverage in the article – even though no pic! The article also mentioned that we are in the Prime Time Comedy concert on Wednesday, 15th April at the Melbourne Town Hall.
I’ve offered a photo or two to go on the web page for the Prime Time concert on Wednesday, 15th April and it was accepted but it hasn’t appeared there yet.
A great interview on Thursday, 2nd April by Maggie and Roger on 3MBS. I’ve recorded it for posterity – with a few blank spots when my computer lost the signal and I had to log into it again. They played “I lived my life” and “Friends will make us strong” and there were lots of laughs – how surprising!
Titanic Theatre Restaurant has been distributing brochures to their (targeted) tables for the past three or four weeks and will continue until the season is over. There is also a link to our website on the Titanic website. (We have a reciprocal link on ours).
Aaron Joyner of Magnormous (Ozmusic) has the Magnormous Trivia Night at the New Capers on Monday 6th and has our posters and brochures. We will also appear in a Power Point Presentation which is part of the evening. (This is because we have donated two doubles for the second week of the show as prizes.) Aaron is coming on Thursday, 23rd.
Joy-FM has an interview with Maggie and Jan for broadcast on Sunday, 19th between 6-7pm. This will be repeated later in the following week and will be available as a podcast.
I did an interview on ABC-Ballarat – radio – last Friday which went very well.
Beat Magazine has an advert and an article with photo in their Comedy Festival supplement – out April 1st.Good pic and good coverage.
Swiss House has lots of our posters and brochures. I saw them on Friday, 3rd and have given them two doubles for the two preview nights – 14th and 15th.
Ideal Tools website – belonging to a family member – is offering two tickets for anyone who buys goods over $250 and has a big promo about the show on his website and forum page. He’s given some away but as his clients come from all over Australia, we haven’t had any takers yet! Good advertising though!
We are on websites: http://www.citysearch.com.au/ – admittedly on page 7 for April – but we’re there!
http://www.whatsonvictoria.com.au/ Regions: Melbourne, Events: April, and there we are. We’re also listed along the RH side under “events” on the “Melbourne” page: (good article with pic)
and http://my247.com.au/ – “Win a double pass to Absolutely Silly Old Buggers” on the front page!! (3 doubles for each of 14th and 15th).
Mairi Nicolson of ABC Classic FM had organised an interview then went on leave. She passed the info to Julie Howard to do in “The Scene” and it's now organised that Maggie and Roger will do the inteview with Julie for broadcast on the 11th April between 1 and 5pm. Mairi is coming to see the show on Tuesday 21st.
Rachel Fothergill of Chapel off Chapel expressed interest in the show and has now accepted a ticket for Fri. 29th.
Lots of other invitations have gone out courtesy of Maggie’s famous friends – still awaiting acceptances – or not! I have gone overboard on the invitations for 16th (our ‘opening night’) and may have to pay for some of them! I didn’t read the fine print soon enough! So we can’t offer any more freebies for that night.
Jim Murphy, reviewer, coming on Tuesday 14th.
Martin Bedford, agent from Sydney, SAYS he’s coming but hasn’t given me a date yet.
Bill Jeffrey of JOY-FM is coming on Friday, 17th.
I’ve sent heaps of stuff to the major papers, radio stations and TV stations but so far no takers from them. I’ll do a follow up next week and see if we can squeeze in somewhere.
I sent press releases to all the local papers in the areas where all the cast live – Julie Houghton’s suggestion. No replies from them but if they’re interested, they’ll probably just publish it anyway – or not. I'm hoping the cast will see something about themselves in their local paper and let me know.
MOST IMPORTANT NEWS
I saw a rehearsal on Friday night and was totally blown away!!!
The show is in VERY good hands and I can't wait to see the result on opening night.
Posted by Gillian at 1:55 AM No comments: